30 Seconds to Mars - This Is War Album Review

Review of This Is War Album by 30 Seconds to Mars

Review of 30 Seconds to Mars album This Is War 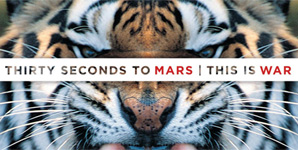 While their self-titled debut in 2002 passed under the radar, 2005's 'A Beautiful Lie' saw 30 Seconds To Mars propelled to headlining status at Give It A Name festival on the back of hits such as 'The Kill' and 'From Yesterday'. A record company dispute provided a backdrop to the recording of this follow-up, which is supported by a UK arena tour in February 2010.

Clearly embracing their grander appeal, 30STM open with the atmospheric intro of 'Escape' before Shannon Leto grabs the attention with the thunderous drums that introduce 'Night Of The Hunter'. Tinged with electro, the guitar lines have a touch of stadium-specialists U2, while Jared Leto switches between whispers and roars. A pulsating anthem, it is only spoiled by a poor command of the French language, but following it up with the sweeping 'Kings And Queens' keeps the momentum going and in truth the quality rarely drops. Many of the songs are filled with angst and fighting oppression and though specific details are not present it could well be taken for the broader meaning of standing up for oneself. Certainly the energy and dynamics that power 'Closer To The Edge' and 'Search And Destroy' are an invigorating catalyst, but it is the more considered approach of 'Hurricane' that steals the show. A brooding piano number, it is truly stirring when Leto begs the question "do you really want me dead or alive to torture for myself?" and shows this is more than just a band to champion for the emo generation. The only real gripe with 'This Is War' is an overuse of the recordings of 30STM's fans, The Echelon, which despite being a commendable idea leaves '100 Suns' feeling cheesy once the applause kicks in. It certainly doesn't spoil the album though, which easily proves that the band's success with the last record was no fluke and if anything surpasses expectations to be a very enjoyable alternative rock collection.