Portland, and Oregon in general, has been a veritable hive of brilliant music for years now, with a plethora of great bands and acts serving up a number of formidable releases. No exception to this is 31Knots, whose eighth full length 'Trump Harm' has just dropped, and I'm here to fill you in. 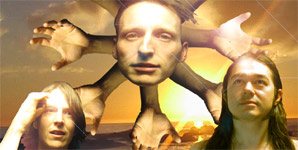 What's evident from the offset is that these guys have lost none of their edge. Opener 'Onanist's Vacation''s jagged rhythms, punk bass and jangly new wave-esque hit you square in the nuts. Sounding like a reimagining of something by The Pixies circa 'Doolittle', and yet it's so much more. The raw energy of this band is still present, and consistent throughout. Even the calmer parts of the album, such as 'A Lot Can Tell' and 'One Tounge Room (Come to My Senses)', somehow ooze immediacy often lost when the tempo drops.

It's never ceased to impress me how these guys take on the production of their stuff with the same respect and attention to detail as they do the playing of their respective instruments, and the writing of the songs themselves. It's this that keeps their particular take on grandiose post punk fresh, interesting and all along sounding vital.

The simplicity of 'Get Gone' is the archetypal 21Knots tune. Starts simple, whilst the sound fills and build, gradually, brooding.and then just when you think you've got it all figured out, they flip it on you. Changing up rhythms, syncopation, never letting you settle, whilst at the same time never giving you cause for boredom.

Sure, it's artsy, theatrical, at times a li'l hard to digest, but respect where respect's due. 31Knots have persevered. 13 years since their first release, they've stuck to their guns, kept their ear to the ground and, well, I'll be damned if it's not paying off. Whilst I can always tell a track is by these guys, there's also a sense that they encapsulate, for me, so much of what is good in Oregon musically speaking. It's a little bit Quasi, a bit Menomena, Portugal The Man and even Floater. It's Pop, It's Math Rock, Post Rock, Punk, Grunge.It's Oregon.