Australian Rockers 5 Seconds of Summer Have Landed Their Second Straight Number One Album In America. 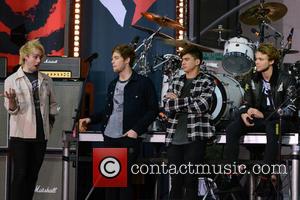 The band's second album, Sounds Good Feels Good, debuts at the top of the Billboard 200 with 179,000 pure sales, making them the only non-vocal group to have its first two full-length studio albums come in at number one on the chart.

Country star Carrie Underwood's fifth studio record, Storyteller, made its debut at number two. All of the former American Idol winner's albums have reached the top two positions on the Billboard 200.

The Weeknd's Beauty Behind the Madness stays put in the third spot, while Fetty Wap's self-titled album moves up to fourth place.

Blake Shelton rounds out the new top five with his latest best-of compilation, Reloaded: 20 #1 Hits, marking his ninth top 10 album on the chart.