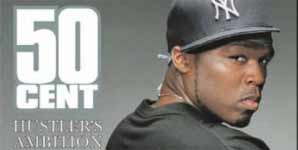 Rapper turned actor 50 Cent is releasing his second track taken from the 'Get Rich or Die Trying' soundtrack. 'Hustler's Ambition' has raw rhymes and soul sizzler sample that takes you back to the hungry streets of Queens. The grimy nature adds to the era before 50 Cent was famous.

The first single lifted from the soundtrack to Fiddy's acting career was ok and that was it ok. "Hustlers Ambition" though is a different story, ok it isn't, but awesome it most definitely is. This is the undisputed heavy weight champion of the hip-hop world at his rhyme spitting and killer backbeat groove best. The powerful groove is matched by powerful lyrics and a performance that is full of the kind of confidence you would expect from a man simply at the top of his game. I have read in other publications saying things like Fiddy is losing his appeal, he's becoming stale etc. Well if this is stale or boring I will eat the CD. This is another Fiddy monster for all the right reasons.