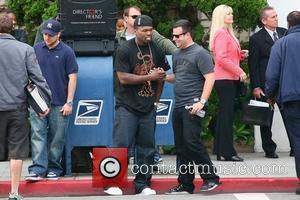 Rapper-turned-actor 50 Cent has had laser surgery on his arm to remove some of his tattoos - because he spends too long in the make-up chair on movie sets trying to cover them up.
The In Da Club star has carved out a career for himself in Hollywood with roles in films like 2008's Righteous Kill, in which he starred alongside legends Al Pacino and Robert De Niro, and he's scored a part in the forthcoming Sharon Stone movie, Streets of Blood.
But 50 Cent admits directors often ask him to hide his distinctive inkings - so he's decided to take a number of them off altogether.
He tells AllHipHop.com, "I took some of the tattoos off because on the movie set, if we got a six o'clock call time, I have to be there (at) two o'clock the night before.
"I gotta go through four hours of make-up before we go ahead and play the role. So I just took it off my arm. My right arm."