'68 is the latest project of Josh Scogin, former frontman of The Chariot and Norma Jean. However, with this duo's 2014 debut 'In Humor And Sadness', it was arguably the scene legend's finest work put to wax. Whereas his previous bands largely went down the hardcore/metalcore route, '68 put out a record which covered blues, punk, grunge, indie and even post-rock. What was more impressive though was that they were able to do this across a whole record with the same vocals, same simple, but effective guitar approach and free-spirited, but firm and concise drumming from Michael McClellan. They're back with their newest record 'Two Parts Viper' which sees them further explore what can be done with just a six string and heart. 'Eventually We All Win' kicks things off with the dirtiest fuzz, stampeding at turbo rhythms. '68 have got two-piece rock n roll nailed as where they lack in numbers, the more than make up for in volume and punch. There's moments of the guitars being absent and there just being light, clacking percussion, to break up the battery, but when the vigour comes back in, it does with a vengeance.

'Whether Terrified Or Unafraid' hits you with bluesy stomp, which '68 proved they have more than a knack for with their last record. However, '68 continue to be able to take the standard old-fashioned guitar method and make it more epic, with their songs usually having a heroic charge to them, this time being in the form of the 'I could of being anyone from anywhere, but I chose to be me, right here' chant.

'Without Any Words (Only Crying And Laughter)' is more sombre with dry, low-key stroking of churchlike strings, the way the tone of this songs feels like you're at confession, this being aided by there being a shade of repentance in the lyrics, for instance the 'I've paid my dues' line.

Once again, '68 show they can go to many places and tones with just a few tools. 'In Humour And Sadness' was such a winner for its diversity and it's much the same for 'Two Parts Viper.' Even though much of this album is just guitar, pedals, drums and Scogin's southern drawl, either screeching or taking it easy; they manage to fit in many moods and flavours.

With that being said, there are more withdrawn songs on this record than before. For instance, 'No Montage' is withered with rusty strings being sluggishly stroked. Even when they up the volume on this one, its mood doesn't alter. With this song, the heart remains the same, no matter what form the shell takes. Whereas 'No Apologises' is sluggish and goes at a stop/start rhythm. Towards the end there's some metallic stomping, but it's in-between sarcastic spoken word from Scogin, giving this song some fire-power, but evening out the reserved tone they're going for.

There's a desperation to 'What More Can I Say' both sonically and lyrically with largely just minimal manipulation in the textures and lines like 'I saw this mistake as one that I had to make' and 'I believe in you, but I don't know how much I believe in me' some lines are sung, some are screamed, but they're always harrowing. The song ends on angelic harmonies, bowing the album out on a hopeful note, but this is still a morosely powerful song.

Overall, this is another winner from '68 and they continue to be one of the finest bands in guitar music. This record doesn't storm the gates as much as their debut, nor is it quite as adventurous. However, it's still a record full of heart, killer signwriting, fire and it's bound to add to their already lethal arsenal live.

Watch the video for The Workers Are Few: 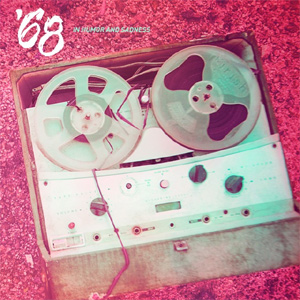