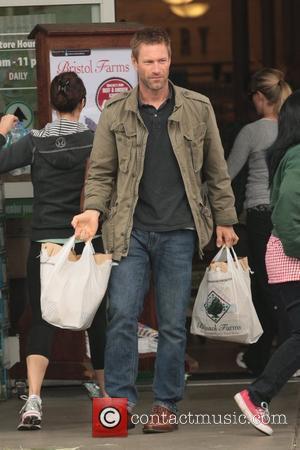 Romantic Aaron Eckhart is so committed to finding a suitable girlfriend he recently flew from Los Angeles to New York just to go on a blind date.
The Dark Knight star is currently enjoying single life as a bachelor but admits he would like to find a partner to settle down with and he is willing to do whatever it takes, revealing he flew across America to have dinner with an unnamed celebrity.
During an appearance on U.S. programme The Tonight Show With Jay Leno on Monday (10Oct11), he said, "I'm not at liberty to say (who). I will say that it was sort of a celebrity blind date. I have different theories about dating. One is, everybody tells you, 'Be proactive, go out there and get it.' And then there's the 'Be passive, let it come to you' (theory). So I was thinking, alright well I'll go do this.
"So I flew to New York and I said, 'Look, let's just meet for 10 minutes and see if we like each other. And if we don't, no skin off my back, I'll just fly back to Los Angeles.'...
"We met in a little corner of a restaurant bar in New York City. She looked at me and I looked at her, and I said, 'That's about it for me.' Well I didn't say that, I said, 'I didn't feel the kaboom.' I sat down and we went to dinner, we had a marvellous time, and I walked her home. No (goodnight kiss). I was a gentleman."