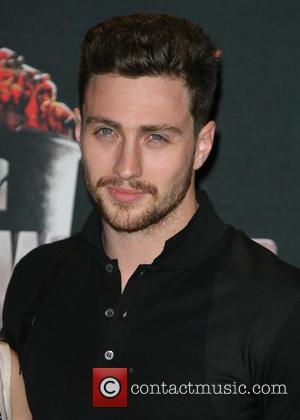 Actor Aaron Taylor-Johnson is building up the courage to jump out of a plane for real after his Godzilla director Gareth Edwards gave him a skydiving experience as a birthday gift.

The Kick-Ass star's Marine character in the upcoming monster movie appears to plummet to earth from a plane in one of the most eye-catching scenes in the new film, but Taylor-Johnson admits he would never be allowed to perform a stunt like that in the middle of shooting.

He tells Wenn, "We jumped out of the plane when it was still on the landing strip, and onto a crash mat. And for the mid-air scenes, I came in from a crane, really high up - a good 50 feet up and dropped in. I don't think they'd insure actors to actually jump out of a plane.

"But right at the end of shoot it was my birthday and his (Edwards) birthday present was for me and him to jump and go skydiving together.

"I still have the tickets because he wasn't allowed to go at the time because he had to edit the movie, and then I was set to do my next movie... I'm intrigued to do it but the more it has been put off the more I'm starting to question it.

"I was really in the moment, like, 'Yeah, let's do it!' Now I don't know. I read something where somebody had a bad accident, so we'll see. I recently was on a plane and looked out the window and thought, 'I wonder if this is sort of the height...' I'm just trying to get into the headspace to do it!"