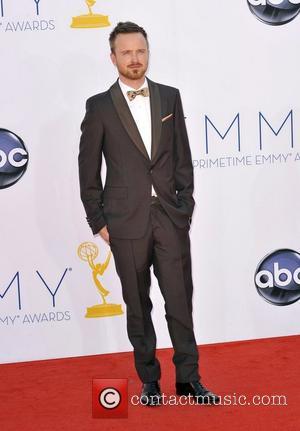 What a time to be alive it is for Aaron Paul. Not only did he win an Emmy Award last night for outstanding supporting actor in a drama series, but he's also set to marry his beautiful fiancée Lauren Parsekian. The 33 year-old Breaking Bad star gushed to People Magazine on the red carpet yesterday (September 23rd) "She's the greatest thing that's ever happened to me." Continuing to enthuse about the forthcoming wedding, Paul said "[I'm not nervous] at all. I'm just so blessed."

Paul was accompanied for his big night by Parsekian, and he complimented "She wakes up so unbelievably gorgeous every day, so I try to look good next to her." However, the actor's delight at his forthcoming wedding was nothing compared to the stunned surprise he got by winning his coveted Emmy. In hindsight, he was a strong front runner for the award, consistently proving himself among the very best in the cast of the much-loved Breaking Bad, however to him it still came as a huge shock. "It's just incredible," he told reporters backstage after winning the award. "I was shaking and trying not to sob. It's just unreal that I get to do what I've always dreamt to do. I'm humbled and honored."