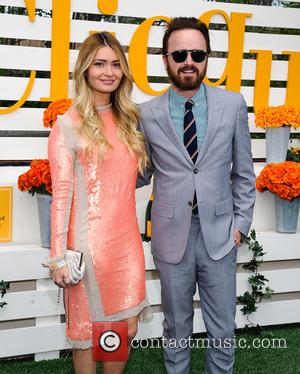 Breaking Bad star Aaron Paul is giving fans a chance to win signed memorabilia from the hit series with a scavenger hunt before the Emmy Awards on Monday (25Aug14).

The acclaimed series ended a hugely successful five-season run last September (13), making the 2014 prizegiving the last Emmy Awards the show is eligible for.

To commemorate the occasion, Paul, who is hoping for a second acting Emmy for his role as Jesse Pinkman, announced on Instagram.com on Wednesday (20Aug14) that he is planning to dole out prized props and scripts to eagle-eyed fans just before the ceremony kicks off at the Nokia Theatre in Los Angeles.

He wrote, "Dear friends, In honor of the Emmys and the final time Breaking Bad will be up for anything the Emmys (sic) I will be holding a scavenger hunt around La on Monday before the Emmys for all of you Breaking Bad fans.

"There will be signed Breaking Bad scripts, posters, dolls, action figures and some really cool Breaking Bad art hidden all over the Hollywood area. Just wanted to do a little something to say 'Thank You' to everyone that has supported us thru out (sic) the years. We couldn't have done it without you! Happy hunting."

Breaking Bad is up for seven awards, including Best Series, which it won last year (13).