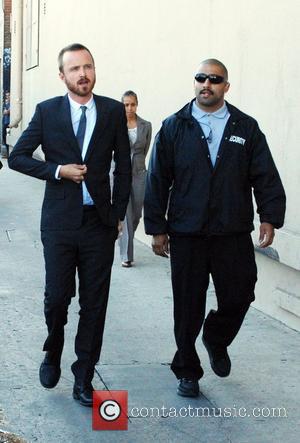 Breaking Bad star Aaron Paul has been commissioned to cover this weekend's (03-05Aug12) Lollapalooza festival in Chicago, Illinois for Pitchfork.com's photo sharing website.
The actor, who has become a festival regular in recent years, has signed up to chronicle his experiences at rocker Perry Farrell's annual spectacular and post them online.
Paul is Pitchfork's latest celebrity guest contributor - Elijah Wood covered Coachella for the website, actress Jena Malone strapped on a camera for Bonnaroo in Tennessee and Bon Iver stars Sean Carey, Reggie Pace and Matt MCCaughan took on the job at the Roskilde festival in Denmark.
As the official presenter of Pitchfork's summer music festival coverage, HTC offers music fans this unique destination capable of capturing a 360º view of festivals around the globe providing in-depth photo galleries, including photos taken using HTC One smartphones. HTC One devices allow music fans to experience music and music festivals through audio, video and imagery in a way no other phone or mobile device can. The HTC Sound + Vision Hub on Pitchfork program brings those capabilities to life.