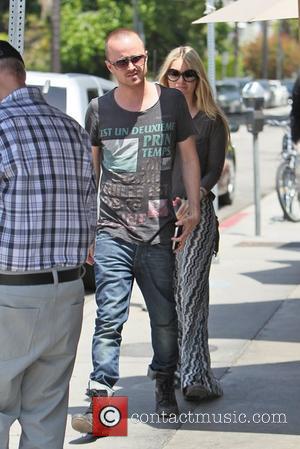 Actor Aaron Paul convinced his former housemate a meteorite had crashed in their backyard - and was left stunned when footage of his prank appeared on the local news.
The Breaking Bad star dug a giant hole in the grounds of the Hollywood property and filled it with rocks and dry ice to give the illusion an outer space object had landed.
Paul's pal was taken in by the prank - but the actor hadn't anticipated his stunt going public.
He tells U.S. chat show host Conan O'Brien, "I have something to confess... my old roommate has the worst luck on the entire planet and he's convinced 2012 is the end of the world so I wanted him to believe that meteorites were slamming into our back yard. I did just that... I played a prank on him...
"I went and bought some actual meteorites and I dug a giant crater in our back yard, filled it up with dry ice, covered it with dirt, put the meteorites in the middle of it and dumped a bunch of water on it, then I set off a dry ice bomb in the back yard. He was in the bedroom sleeping... it exploded and he runs out of his bedroom in his boxers and was like, 'What was that?' 'cos literally the house kind of shook and I go, 'I don't know, the entire backyard lit up'. He ran outside in his boxers and sees this giant crater just boiling."
Paul then showed O'Brien the rocks he used for the prank, and added, "He (roommate) started panicking 'cos he was convinced, he believed these things were slamming into the earth. And it actually made it on Fox 11 news. His girlfriend didn't even tell him she was taking the footage she shot to the news.
"I start seeing my footage (on the TV), I started seeing my backyard with this giant crater boiling. I'm like, 'What the hell is that!'"