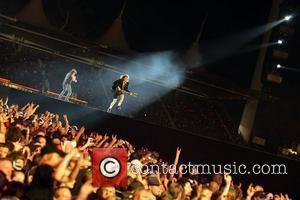 Picture: Brian Johnson and Angus Young of ACDC performing live in concert as part of the Black Ice Tour at the Adelaide Oval Adelaide, Australia -...

AC DC fans have launched a campaign to honour the band's former lead singer BON SCOTT with a street name in Melbourne, Australia.
AC DC fans are calling on Brimbank council officials to label an unnamed lane in Sunshine, a suburb of the Aussie city, Bon Scott Lane, according to Brimbank Weekly.
The Scottish-born Australian rocker lived in Sunshine for five years between 1951 and 1956. He died of acute alcohol poisoning in 1980 after passing out following a night of heavy drinking in a London nightclub and was replaced by current frontman, Brian Johnson.
Former Sunshine resident Paul Murphy says: "More people know AC DC... and having a Bon Scott Lane will make Sunshine famous all around the world.
"Bon lived in Sunshine, went to school there and played one of his first gigs there. He would have walked down the laneway we're looking to dedicate to him, because it was a shortcut for kids to get to Sunshine Tech and Sunshine Primary."
Melbourne, Australia's AC DC Lane was officially named in 2004 to honour the band in the city where its members lived and wrote their first two albums.