The Organisers Of A Music Festival In Toronto, Canada Have Dropped Rapper Action Bronson From The Main Show Following A Swell Of Support For A Petition Urging Them To Pull Him From The Line-up Over A Controversial Song About Rape. 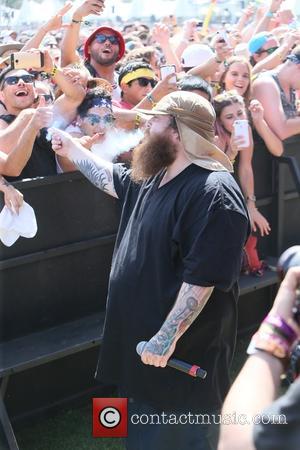 Bosses of next month's (Jun15) North by Northeast (NXNE) festival in Toronto, Canada initially refused to give in to pressure to cancel the hip-hop star's show following the launch of a campaign on Change.org which accused him of glorifying sexual assault in his 2011 song Consensual Rape.

However, they have now axed his slot on the main stage at Yonge-Dundas Square after the petition gained more than 39,000 signatures, but hope to include him in the festival by finding him a place in a venue which is not owned by the city of Toronto.

A statement from NXNE executives reads, "A significant number of Torontonians have indicated their desire to have Action Bronson not perform at the Square. As annual guests in this space we feel we must accede to the strong wishes of the community and honour their input. As a result, we will not be presenting Action Bronson at Yonge-Dundas Square but, hopefully we will still be presenting Action Bronson as part of Northby (sic). We remain fundamentally committed to presenting this artist on a Toronto stage... Hopefully, Action Bronson will accept our invitation to play at another, ticketed venue in the city so the public can decide for themselves if his work has merit."