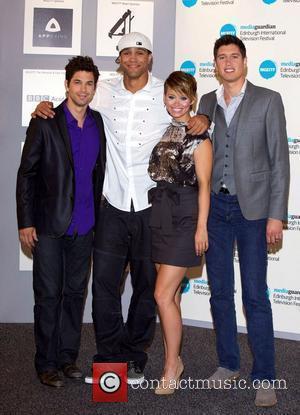 Picture: Adam Garcia, Ashley Banjo, Kimberley Wyatt and Vernon Kay attend a photocall for the Sky1 show Got To Dance during the Edinburgh International Television Festival...

Australian actor Adam Garcia often phones up girls when he is drunk, as alcohol gives him the confidence to share his true feelings.
The Coyote Ugly star 'drink dials' frequently, but admits calling women when he is tipsy often lands him in embarrassing situations.
He tells Closer magazine, "Well, it's hard to remember who, but I drunk dial a lot! I was seeing this girl recently and used to call her up saying I missed her. I can't help it after a few drinks!"
Luckily one person Garcia hasn't called while intoxicated is his former co-star Lindsay Lohan, who remains a close pal after they worked on a movie project together.
He adds, "We starred in Confessions of a Teenage Drama Queen together in 2004 and we've stayed in touch. She's a great girl and whenever I'm in L.A., we meet up for coffee."