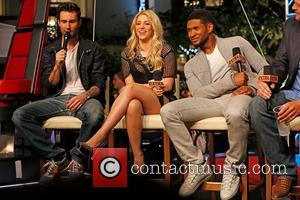 Picture: Adam Levine, Shakira, Usher and Blake Shelton - The US coaches of the Voice at The Grove to appear on entertainment news show 'Extra' -...

Maroon 5 star Adam Levine has signed a lucrative new development deal with Tv bosses at America's NBC network after helping them win in the ratings war by judging hit show The Voice.

Levine and his longtime manager Jordan Feldstein, the brother of movie star Jonah Hill, will create programming for Nbc over the next year, according to The Hollywood Reporter.

Announcing the news on Wednesday (08May13), Nbc president of alternative and late night programming Paul Teldgy says, "It would be impossible to quantify Adam's influence and importance to the success of The Voice. Given those enormous contributions, we're very anxious to work with him and Jordan to see what future shows they develop that can find a home here at Nbc."

Levine reportedly worked behind the scenes on an Nbc comedy pilot set in a karaoke bar in 2011.