Adam Levine Gave Model Wife Behati Prinsloo An Unforgettable First Wedding Anniversary Present By Serenading Her At A Restaurant In Mexico Over The Weekend (Ends19jul15). 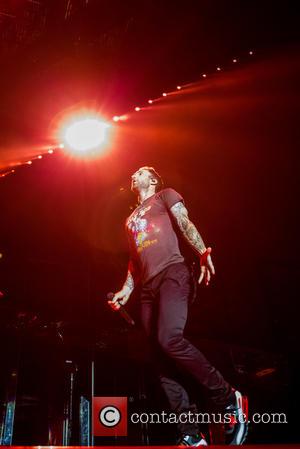 The Maroon 5 frontman and the Victoria's Secret model wed at Flora Farms in Cabo San Lucas last year (14), and the couple returned to the venue on Sunday (19Jul15) to enjoy an anniversary dinner.

Levine decided to publicly show his love for his wife in front of fellow diners when he unexpectedly took the stage and called on the live band to play Marvin Gaye's sexy hit song Let's Get It On.

In video footage posted online, Levine sang the song directly to Prinsloo as she happily sat and admired her husband, while a group of onlookers surrounded the happy couple.

According to E! News, Levine ended the impromptu performance with a kiss and other diners congratulated the two on their anniversary.