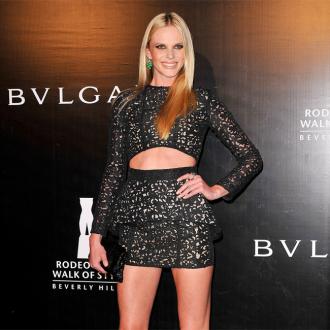 Victoria's Secret model Anne Vyalitsyna, 26, - who dumped the Maroon 5 frontman after two years of dating last April - was spotting cosying up to the 29-year-old Scottish DJ on Valentine's Day (14.02.13) in Las Vegas.

A source told the New York Post's Page Six: ''The two were constantly laughing, kissing and holding each other throughout the night.''

Another friend close to the couple, who were first seen at the Sports Illustrated party at 1OAK nightclub, confirmed their romance began about two months ago.

The insider told USMagazine.com: ''They were all over each other. He came to support her and was playing the role of doting boyfriend. . . They were adorable!''

The Russian beauty paid no attention when the DJ played her ex-boyfriend's hit 'One More Night' as she and the 'Feel So Close' hitmaker ''kissed throughout most of the song.''

Anne blindsided 'The Voice' mentor Adam, 33, when she released a breakup statement on April 2, 2012, without telling him.

Adam and Anne were also first seen together at a Sports Illustrated party in Las Vegas in early 2010.

Calvin was recently named the most successful UK songwriter of 2012 after the chart-topping producer scored a string of hits with Cheryl Cole's 'Call My Name', Rihanna's 'We Found Love' and his own songs 'Let's Go' featuring Ne-Yo, 'We'll Be Coming Back' with Example, and 'Sweet Nothing' featuring Florence Welch.