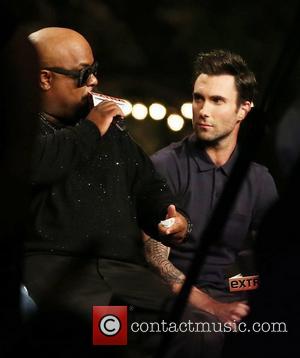 Picture: Adam Levine Judges Of NBC's "The Voice" Appear On EXTRA at the Grove Hollywood, California - 05.11.12

Colleagues and friends, Adam Levine and Christina Aguilera have been working together this past eighteen months on UK export 'The Voice' and despite certain on air spats, they actually seem to remain very close.

Last month, in response to a vast amount of criticism that Aguilera was receiving in response to her weight gain Levine was vocal in his defense of her. At the time he said,quoted in E!, "The one thing about the culture right now-celebrity culture particularly-that is so ugly is [that] people feel like they can just say nasty things about other people.she gets a lot of it.. It pisses me off. Of course I have her back, of course I defend her."

Speaking to Ellen DeGeneres he has repeated his defences. Ellen had praised him for his efforts and he said "It's a very basic thing- She should be left alone. No one should bother or haggle her about her weight or anything that she does or says. So, that's it. That's how I feel about it." Levine is currently recording for both season three and four of The Voice, which he's found somewhat confusing, especially knowing that he'll miss Christina. "The first time we [shot both series in a week] was trippy, because it wasn't the original people, but it was also a lot of fun. I remember thinking to myself, I love these guys, but just miss Cee Lo and Christina. But then I realized, it's OK because I'm going to see them in a week from now." Usher and Shakira have taken the places of Cee Lo Green and Christina Aguilera as the coaches in the US talent show. Series three is currently airing and series four, with the new judges, is set to return on March 25th 2013.