Adam Sandler has revealed his own personalised star on Hollywood Boulevard's Walk of Fame. 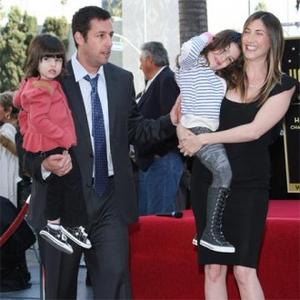 Adam Sandler has unveiled his own Star On The Hollywood Walk Of Fame.

The 44-year-old actor took his wife Jackie Titone and their two daughters Sadie, four, and Sunny, two, along to the unveiling on Hollywood Boulevard, and the proud star admitted he still feels very lucky to even get to work on films.

The 'Happy Gilmore' star said: "I work hard as a comedian, then I got on TV, then I got on the movies. So many people come out here with the same dreams I have and I'm getting to do that. I really appreciate it."

Both his daughters praised their father - who stars in upcoming romantic comedy 'Just Go With It' with Jennifer Aniston - saying into the microphone: "I love my daddy."

And Adam's family looked on proudly as he unveiled the 2,431st star on the Walk of Fame.

Colin Firth recently unveiled his star, the 2,429th, on Hollywood Boulevard, and he thanked his wife Livia Giuggioli for being with him for every step off his "extraordinary Journey".

He said: "I want to thank everybody that has accompanied me on this extraordinary journey, but probably more than anybody I could ever imagine, Livia, who has walked every step of this with me joyfully and truthfully.

"When I look down there at that star, it's her name I see."