Standing Ovation For Adele At The 2012 Grammy Awards 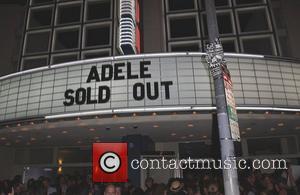 Adele has finished her highly anticipated live performance at the 54th Grammy Awards. Greeted by a standing ovation, Adele - who thanked her producer Paul Epworth for his hand in creating the song when it won Song of the Year - performed an ambitious and rousing version of 'Rolling in the Deep', backed by a choir.
After an introduction by Gwyneth Paltrow, Adele launched into the epic performance and seemed to catch the eye of a friend in the audience as she sang and cracked a smile. The performance may have lacked the heartbreak element of her infamous BRITS performance last year but it was moving, nonetheless. When she had finished, the entire audience took to their feet to clap and congratulate the singer who underwent surgery on her vocal cords last year. Rihanna was waving her hands in the air in adulation, whilst Sir Paul McCartney looked visibly impressed. Adele paused for a moment at the end of the song, to take in the applause, no doubt relieved that such a high-profile performance had gone to plan.
Adele is one of the favourites to win the coveted Record of the Year award, which is yet to be announced. The Best New artist award, presented by Carrie Underwood and Tony Bennett, was awarded to Bon Iver, following a tribute to Glen Campbell. The tribute was performed by The Band Perry and Blake Shelton and Campbell performed his hit 'Rhinestone Cowboy.'