Adrian Grenier Has Shrugged Off The Poor Reviews Of The Entourage Movie By Insisting He Would Be On Board For A Sequel. 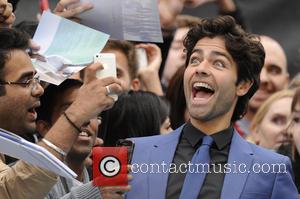 The Hollywood heartthrob played movie star Vincent Chase in the hit U.S. TV series and the subsequent movie, which failed to impress critics following its release earlier this month (Jun15).

However, Grenier is adamant he would welcome a sequel as he gets along so well with his co-stars, who include Jerry Ferrara, Jeremy Piven and Kevin Connolly.

He tells Britain's Daily Mirror newspaper, "I absolutely think we could make an Entourage 2, the possibilities are endless with these characters. We're like family, it's like when you go to a reunion you don't have to catch up, we don't have to struggle to connect again. That's what it was like when we stated touring with the movie. I hadn't seen them in so long and I didn't know if it would be different, weird or awkward but it was just easy."