Actors From The Entourage Movie Were Held Up Outside The Bbc's London Headquarters On Wednesday Morning (10jun15) After A Man Attempted To Set Himself On Fire. 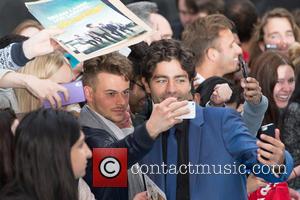 Police were forced to cordon off the area when a 36-year-old doused himself in petrol and threatened to torch himself in a street outside the building before he was tackled to the floor and restrained by security guards.

BBC bosses report that actors from the movie adaptation of the hit U.S. TV series, which stars Adrian Grenier and Jeremy Piven, along with soccer legend Thierry Henry, who makes a cameo in the film, were held in a van near the studio after emergency services descended on the area.

The stars are believed to have been heading to the headquarters for a promotional appearance, following the European premier of the film in the U.K. capital on Tuesday evening (09Jun15).

Cops arrested a man for public order offences and he remains in custody.