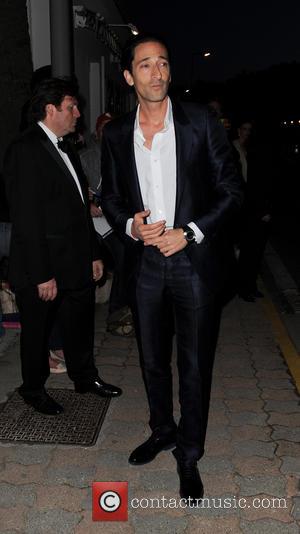 Oscar winner Adrien Brody has signed on to narrate a harrowing new animal rights video targetting the use of apes in films.

The footage, filmed for People for the Ethical Treatment of Animals by award-winning ad agency Bbdo, features a distraught chimpanzee languishing in a stark, barren cell, pacing back and forth with no one to interact with and nothing to play with.

It was shot to illustrate the tragic lives of animal 'actors' and urges viewers to put themselves in the great ape's place.

Ironically, the life-like ape in the ad was not an animal at all, but the result of cutting-edge computer graphics.

Brody says, "The bottom line is that we no longer can excuse the exploitation that exists in this world. Great apes are no exception. They are extremely sensitive, intelligent, and emotional beings. It's sad that they're still commonly used in television and film, especially when we know how much they suffer behind the scenes.

"Acting should be left to actors - and that means human beings who have a choice in the matter."

Brody isn't the only Oscar winner to team up with Peta to speak out against the abuse of apes in the entertainment industry; his The Darjeeling Limited and Fantastic Mr. Fox co-star Anjelica Huston hosts the video No More Monkey Business, which Peta has sent to many ad agencies that have since agreed never to feature great apes in their commercials.