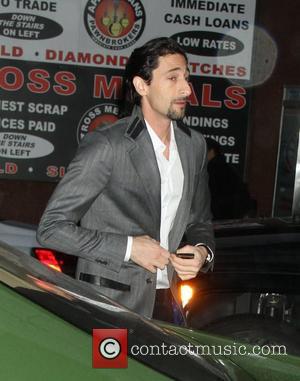 Oscar winner Adrien Brody is still waiting to take tea with Gerard Butler after winning the 'date' at a charity auction.
The Pianist star bid $15,000 (£9,400) for the odd item last year (Nov11) at a fundraiser to build a school in Haiti - and he's still waiting for a call from the 300 star.
Brody says, "I attended a charity function for Artists for Peace & Justice and one of the things they were auctioning off was tea with Gerry Butler, which I thought was really interesting, so I thought, 'Why not?' I had the winning bid and I've yet to have tea with Gerry Butler. He has not fulfilled his obligation... I paid thousands and thousands of dollars... It was, like, 15 grand."
Brody made sure he honoured his own auction item - he chatted to a fan over champagne minutes after she won the bidding: "We pull out a bottle of champagne and people bid. We got $17,000. I had champagne with that woman that night. She didn't realise it meant that night... Her husband, I don't think, really appreciated it. He had to cut the cheque too, which is really terrible."