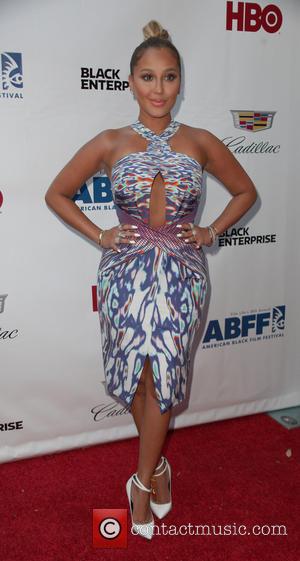 Actress Adrienne Bailon has clarified comments about her ex-boyfriend Rob Kardashian after his sister Kim Kardashian blasted her for making scathing remarks about him.

The former Disney Channel star dated Kardashian for two years until 2009 and the pair's romance fell apart onscreen on the family's reality show after he admitted to cheating on Bailon.

The actress slams him in a new issue of Latina magazine, insisting she hates being blamed for their break-up.

Kim was furious over the article and hit back at Bailon on Twitter.com, writing, "Funny how she says being with a Kardashian hurt her career yet the only reason she has this article is bc (because) she is talking about a Kardashian... So sad when people try to kick my brother when he is down #FamilyForever."

Bailon didn't hold back after hearing about Kim's comments, and on Thursday (31Jul14), she took to Instagram.com with a note indirectly pointed at the reality Tv star.

Bailon wrote, "Fame and career are two different things. I've always had a career. I have been working hard since I was 15 years old. Being someone's 'girlfriend' was never what I wanted to be famous for.

"What makes you 'famous' isn't always what you want to be 'labeled' as, or known for. If anyone should understand that...It should be you," slyly referring to Kim's 2007 leaked sex tape with ex-boyfriend Ray J.

She continued, "I also stated in the article that none of this would have stopped me from being in love and being in that relationship. I just would have gone about it differently. You can love someone just as much in private. We all learn from our first loves. #Godbless"