Aidan Turner spent a month 'learning to move like a dwarf'

Aidan Turner has revealed he spent a month learning how to move like a dwarf for the 'Hobbit' movies. 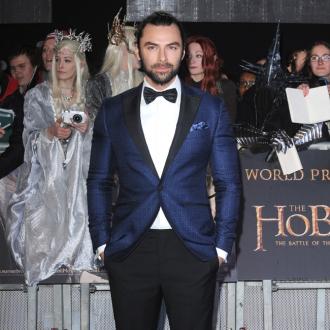 Aidan Turner spent a month learning how to move like a dwarf for the 'Hobbit' films.

The 31-year-old star - who appeared in the role of Kíli, one of the twelve companions of Thorin and Bilbo - has revealed the unusual preparation he did before appearing in the Peter Jackson-directed movies.

Asked what it was like working on the 'Hobbit' films, Aidan replied: ''Incredible. We were there the entire time. The dwarves were there six to eight weeks before we started shooting. For a dwarves boot camp. We did a month on how to move like a dwarf.

''Then Peter Jackson came in, looked at it, said, 'You look stupid, scrap it, just walk normally.' Ah f**k, all right then, let's do that.''

''And then you get the best actors coming through, so you had three or four months where Billy Connolly was over, so you get to hang out with Bill at the bar and talk s**t. Just brilliant times.''