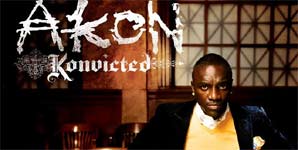 Akon
I Wanna Love You
Audio

Akons new album is titled, Konvicted, The first single, Smack That, featured none other than Eminem, Continuing in the same fashion, this single, I Wanna Love You, features Snoop Dogg!

Akon was born in Senegal and moved with his family to the US at the age of seven. His father, legendary percussionist and jazz musician Mor Thiam, raised Akon to believe in and understand the power and influence that music could have. It was this deep rooted love and passion for music, evolving from filial admiration, which allowed him to turn his life around, despite his trouble as a youth residing in New Jersey.

Akon began playing several different percussion instruments and eventually embraced hip-hop music and culture, despite his initial disdain for the genre. "When I first heard hip-hop I thought it was rubbish because I didn't understand the concept of people talking over music," Akon recalls, "But as I started growing up, living a little and listening to the lyrics, I realized that I was going through a lot of stuff these rappers were talking about and I could relate."