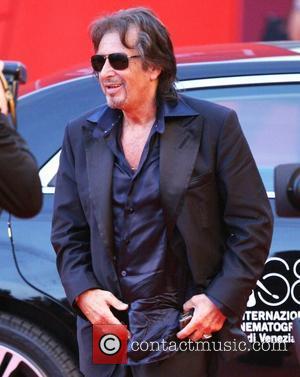 Al Pacino has admitted that his true love in Hollywood is found behind the camera rather than in front of it.

Speaking to UK newspaper The Telegraph the legendary actor said "Once I started, the magic of movies came into my life, I fell in love with the idea of making a movie." Though the well-practiced star does not profess to being one of the best 'I always feel like a dilettante making movies, because I know great directors and I'm not that'.


The 71-year-old actor who this week received the Jaeger LeCoultre Glory award at the 2011 Venice Film Festival was speaking ahead of the release of his latest movie, Wilde Salome which is a reinterpretation of Oscar Wilde's controversial work Salome, a story of lust and greed. Pacino is also a lifelong fan of Wilde and described how important the writer was to him "Oscar Wilde was a great writer - a genius, if you will, who was taken out before his time. We know from his writing that he was a very liberal thinker and a visionary in terms of his feeling for people and how he wanted society to be more humane." The New York native received a warm reception from the crowds as he appeared in Italy this week.

The Hollywood A-lister began his career in 1969 and achieved international fame after starring as Michael Corleone in Francis Ford Coppola's epic 1972 mafia movie The Godfather. He has also starred in Dog Day Afternoon and crime thriller Serpico. The actor has also been nominated for eight Academy Awards, winning one for best actor in 1992 movie Scent of a Woman.