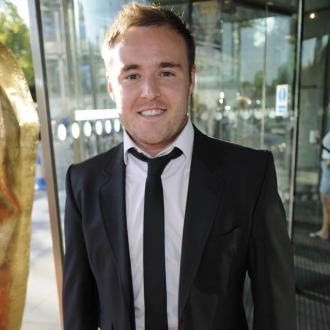 Alan Halsall dedicated his prize at the National Television Awards to his late co-star Bill Tarmey after wearing his watch for good luck.

The 'Coronation Street' star - who plays Tyrone Dobbs - won the award for Serial Drama Performance and used the moment to remember Bill, who played Jack Duckworth for three decades on the soap before his death in Tenerife on 2 November at the age of 71.

Speaking after picking up his award, Alan exclusively told BANG Showbiz: ''I'm sure Bill is looking down on me now. He'll be having a pint of Guinness for me. His wife asked me to wear his watch today so here it is.

''This award is for him. He literally guided me from the start of 'Coronation Street'. He was like a second dad onscreen if you like. He was a huge influence. He'll be laughing at this right now. He'll be laughing his head off that I've won this award.''

The soap also won the award for Serial Drama of the year and star Bill Roache, who plays Ken Barlow, admitted he is thrilled with the victory.

He said: ''Winning this award is down to the writers and the producers. How the writers come up with these storylines I don't know? They are brilliant. We have the great stories and we have the ability to portray those stories. We've got a great cast.

''The champagne will be flowing tonight and we will have a good evening.''

'I'm A Celebrity... Get Me Out Of Here!' and Ant & Dec were also big winners at star-studded event in London's O2 Arena, which was presented by Dermot O'Leary on Wednesday night (23.01.13).

The presenting duo won the top prize for Entertainment Presenter for the twelfth consecutive year despite not being able to attend.

Helen Flanagan and Ashley Roberts collected the award on behalf of the ITV reality show after it was voted Entertainment Programme of the year.

The emotional 66-year-old comedian - who broke into tears twice after receiving her award - was also recognised for her work as an activist supporting the Gurkhas.

She said: ''What touched me tonight was seeing a picture of my daddy because he's dead now and I keep my family in here.''

Olympic heroes, Lord Sebastian Coe, Sir Chris Hoy and David Weir CBE picked up the prestigious Landmark Award on behalf of all those who involved in London 2012.

'The X Factor' host Dermot donned his dancing shoes once again to perform a complicated routine to 'It's Got To Be You' with 'Strictly Come Dancing' judge Darcey Bussell.

'Paul O'Grady: For The Love Of Dogs'