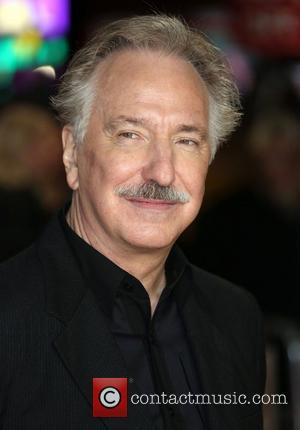 Alan Rickman won praise from his Gambit director for stripping off and filming nude scenes in a glass-fronted London office block.

The veteran actor shed his clothes for a scene in the comedy caper and he filmed it at 30 St Mary Axe, the London skyscraper known as the Gherkin, which was designed by famed architect Norman Foster and features floor-to-ceiling windows.

Director Michael Hoffman reveals Rickman didn't ask him to close the set for his naked scene and went ahead with filming despite the worry of being overlooked by passers-by.

He says, "I did think it would be very hard to have an open set in an all-glass Norman Foster building. But he didn't ask for us to close it off - he was very brave."

Rickman, 66, jokes, "Sometimes you can get costumes you can't bear wearing. So it was a relief not to have to say, 'I don't like this costume.'"

The film, about an art curator who seeks revenge on his boss by selling him a fake Monet painting, is a remake of Sir Michael Caine's 1966 movie of the same name and also featured an embarrassing scene for Rickman's co-star Colin Firth.

The Oscar winner had to film without his trousers in front of real guests at London's upmarket Savoy hotel.