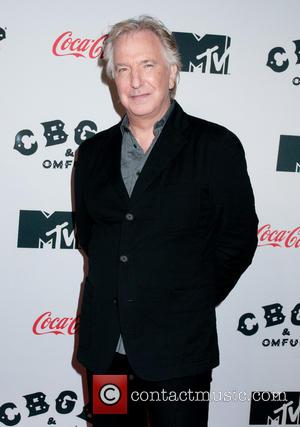 Actor Alan Rickman almost derailed his appearance in his first Hollywood movie after injuring himself during a stunt.

The Harry Potter star was filming his very first scene in Die Hard, which required him to crawl on a ledge and jump to the floor, and ended up in the emergency room after a mishap.

He says, "We got the scene and in one of the takes I heard (breaking noise) and I said, 'Uh oh, we're in trouble.'

"Fast forward to the hospital... and they said, 'You've either torn a ligament or a cartilage. If you've torn a ligament you're out of action for six months and we won't know about the cartilage 'til tomorrow... What we need to do is put a leg brace on your knee and you can't put any weight on your knee for the rest of the month.'

Rickman still had one scene to shoot, despite the injury, and had to improvise after a producer refused to allow him to use his crutches.

He continues, "I said to them, with kind of a tact of survival instinct, 'Listen I still have a scene to shoot, could you pull my trousers over the leg brace...?'

"I'm going up in the elevator, I'm on crutches because they told me not to put any weight on the leg, and there's a producer standing there and he says, 'Could we lose the crutches for the next scene?' The next scene is where he pretends to be an American and fools Bruce Willis, so if you ever watch that film again... I'm playing that scene standing on one leg."