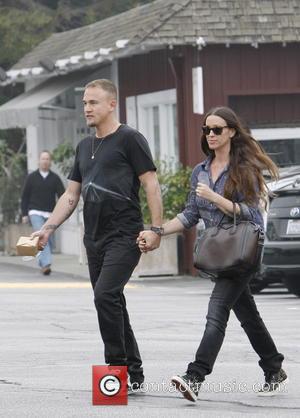 Alanis Morissette is looking to bring her hit 1995 album Jagged Little Pill to the world of musical theatre, with the singer apparently working on the script for a musical adaption of the hit album. The singer and songwriter is working on a stage production, also set to be called Jagged Little Pill, that will contain some of the album's most famous songs, as well as some of her other material and some new songs made specifically for the show.

According to Playbill.com, Alanis' stage show will be given a 2014 workshop production and it will include the songs 'You Oughta Know,' 'Hand in My Pocket,' 'Ironic' and 'You Learn,' in addition to a collection of other songs, both new and from her existing catalogue.

Tony and Pulitzer Prize winning composer Tom Kitt, who worked on the stage adaption of Green Day's American Idiot, will write the orchestrated portions of the songs and provide new arrangements for the tracks so they translate better on to the stage. Vivek J. Tiwary, who also worked on American Idiot, will produce alongside Arvind Ethan David. No director or arrival date for the show has been announced.

"I look forward to taking the heart of Jagged Little Pill and expanding its story, fleshing it out into ever deeper layers of emotionality, specificity, humanity, power, physicality, spirit and fabulism," Morrissette said in a statement (via Paybill.com). "I look forward to collaborating with Vivek and Tom and our whole inspiring team to create something greater than the sum of our parts."

Jagged Little Pill is still one of the most successful albums by a female artist and continues to hold the record for the best-selling debut release by a female artist in U.S. chart history. It is the highest selling rock album of the 1990's and stayed at the No. 1 spot on the Billboard 200 for 12 weeks upon its release. The album went on to win Album of the Year at the 1996 Grammy Awards, making her the youngest winner of the award at 21. The album has gone on to sell over 33 million copies worldwide. Jagged Little Pill continues to be successful to this day