Survival is never guaranteed, especially when you're living in an Ice Age. Set in Europe 20,000 years ago during the Upper Paleolithic era, a young cave boy is being taught by his father how to become a man. He must learn how to hunt and defend himself from the vicious creatures they live among in order to survive, but when he thrown over a cliff by a beast during a bison hunting expedition his father and the rest of the tribe presume him dead.

He is far from it, however. After surviving the fall with just an injured leg, he finds himself facing death once again when he is set upon by wolves. When one of the wolves is critically injured, he can't find it within himself to kill it, and so he takes it with him to a cave where he shelters for a few days and does his best to nurse it back to health.

Naturally the wolf is unfriendly at first, but it isn't long before he warms to his former enemy. Which is just as well because this alliance could be the only thing that will get this caveboy safely back home to his family.

Watch the trailer for The Book Of Eli

Continue: The Book Of Eli Trailer 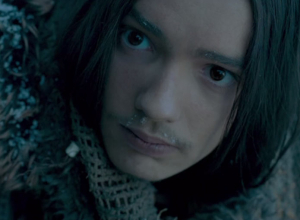