'30 Rock' actor Alec Baldin has been accused of making a racist attack on photographer G. N. Miller, who he insulted after being questioned about the lawsuit against his pregnant wife Hilaria Thomas. 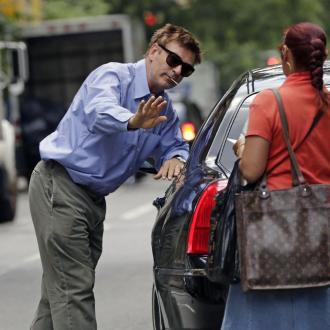 Alec Baldwin has been accused of unleashing a racist rant against a paparazzi photographer outside his apartment building.

Alec is alleged to have called Miller, who is black, a ''coon'' and a ''crackhead'' and unleashed other insults before proceeding to make comments about his mother, the former police officer wrote in his statement.

The 54-year-old actor also apparently told the snapper to ''suck my d***'' and branded Miller's ID showing he is a retired police officer as ''fake''.

Miller told the New York Post newspaper: ''He was saying some serious racist stuff. He could have said a lot of other stuff. But he used all of the stereotypes associated with black people.''

Shortly before the altercation, Alec had been approached by a female New York Post reporter inquiring about the lawsuit against his wife, to which Alec is said to have responded by grabbing her arm and saying: ''I want you to choke to death.''

However, following the altercations, Alec is filing a formal complaint against Miller - who he refers to as ''Ralston'' in a series of tweets.

He also thanked officers who came to his home and took his statement about being ''assaulted''.

He continued in tweets that still remain on his page: ''Thank u 2 NYPD officers who came to my home 2day so that I could file a formal complaint against NY Post ''photographer'' who assaulted me (sic)''

Alec told police Miller ''pushed into him'', but the photographer claims it was the other way round.

In a statement on behalf of the actor, a spokesperson said: ''That's one of the most outrageous things I've heard in my life.''