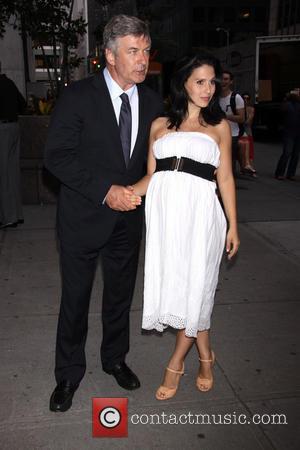 The couple paid their respects to The Sopranos star at a church in New York City, and an online report suggested Baldwin's partner Hilaria had been tweeting throughout the service.

Initially, the former 30 Rock star brushed off the allegations by posting a simple message on the website, writing, "Someone wrote that my wife was tweeting at a funeral. Hey. That's not true. But I'm gonna tweet at your funeral".

However, he returned to his Twitter page later in the day to rant about the report, writing, "My wife and I attend a funeral to pay our respects to an old friend... How much of this s**t are people supposed to take? With these f**king blatant lies every day. My wife did not use her phone, in any capacity, at our friend's funeral. Now, f**k this Twitter + good luck to all of you who know the truth."

Baldwin's page was then taken offline.

Hilaria attempted to explain the timing of messages which appeared on her page on Thursday, adding, "Here is some info... When someone tweets something at a certain time, and you retweet it later, it posts the time the first person tweeted."