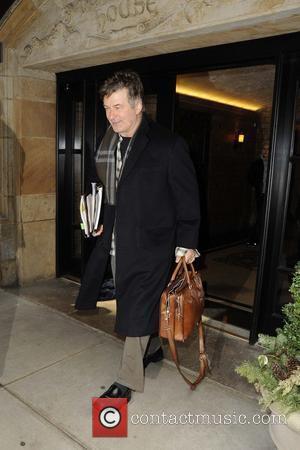 Picture: Alec Baldwin - Alec Baldwin is seen in a surprising good mood as he leaves his Manhattan apartment at New York - New York ,...

Alec Baldwin has expressed his disappointment after private emails exchanged between himself and Shia LaBeouf were made public by the Transformers star on Wednesday (20Feb13), after quitting their Broadway play Orphans.

LaBeouf was due to make his New York stage debut opposite Baldwin and Tom Sturridge next month (Mar13), but he bowed out of the show due to "creative differences" after apparently clashing with the veteran actor.

LaBeouf published screen shots of his email correspondence with Baldwin, director Daniel Sullivan and playwright Lyle Kessler on his Twitter.com page in a bid to explain his sudden decision to leave the production.

In one exchange, LaBeouf apologises to Baldwin "for my part of a dis-agreeable (sic) situation", while Sullivan's reported response reads, "I'm too old for disagreeable situations. you're one hell of a great actor. Alec is who he is. you are who you are. you two are incompatible. i should have known it. this one will haunt me. you tried to warn me. you said you were a different breed. i didn't get it."

Baldwin writes, "I don't have an unkind word to say about you. You have my word," to which LaBeouf replies, "same... good luck on the play. you'll be great."

The 30 Rock star has since told the New York Times that he and those involved in Orphans were "very disappointed" by LaBeouf's decision to go public with the emails.

He says, "You expect communications to be private, because everyone wants this process to be as collegial as possible. Everyone is very sad about what's happened."

Meanwhile, Orphans producers have drafted in 3:10 to Yuma villain Ben Foster to replace LaBeouf as the emotionally unstable character Treat. He is due to join the cast for rehearsals on Friday (22Feb13) - and LaBeouf is thrilled by the casting.

He tweets, "Ben Foster is a beast. He will kill it."

The revival of Lyle Kessler's 1983 play is still scheduled to open for previews at the Schoenfeld Theatre in New York on 19 March (13). The production will officially launch on 7 April (13).