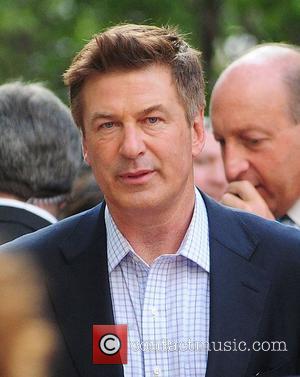 Picture: Alec Baldwin The Cinema Society With The Hollywood Reporter & Piaget and Disaronno screening of 'To Rome With Love at the Paris Theatre New York...

Alec Baldwin doesn't seem quite right at the moment does he? Fresh from his well-publicised war on New York Daily News journalists, the comic actor was on 'The Letterman Show' and had somehow managed to direct the conversation in such a way that he was dropping his pants within minutes of meeting the legendary chat show host.
"I've been trying to diet," he said. "I've lost so much weight ... the problem is that none of my clothes fit me. So, if you put your hands in your pockets, your pants come off." He then proved to do just that, according to CBS, with a bashful Letterman also joining in after cajoling from his audience.
That's about as wild as it got - which is pretty wild - and then Baldwin moved onto addressing his recent bout of whack-a-journalist. "The same guy did it to me before," he said in reference to the photographer he roughed up, "He's very masterful at getting really close to you with the camera. You think they're going to hit you in the face. ... They want you to react." He also reacted to the front cover of the Daily News that showed him lunging at photographer Marcus Santos. "I think you can see I'm forming the letter 'f" with my mouth," Baldwin joked upon seeing it "And what I'm saying is - I said to him as I walked up to him, 'What F-stop are you on with the camera?' And he said, 'I'm on a something,' and I said, 'That's not the F-stop ... You have to set the camera on the right F-stop.'" Hmm.