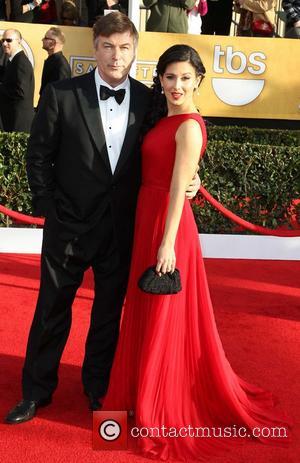 The New York Police Department's Hate Crime Task Force has launched an investigation into Alec Baldwin's recent outburst at a New York Post photographer. The snapper was called to a downtown station where he was interviewed about an alleged racially charged run-in with Baldwin outside the actor's East Village apartment building on Sunday (February 17, 2013). Photographer G.N Miller, a retired NYPD detective, told cops that the 30 Rock star called him a "coon," "a crackhead" and a "drug dealer."

Baldwin reportedly made the comments after telling reporter Tara Palmeri, "I want you to choke to death." The journalist had approached him while he was walking his dog to ask about the lawsuit against his wife Hilaria Thomas. "He said some foul s--t about my mom," Miller said. "He kept calling me a name, coon." Baldwin rejected the claim that Miller is a former police officer on Twitter, telling followers, "Moments after I tweet about the Post, Ralston, the ex-crackhead 'photographer' shows up at my door w 1 of Murdoch's nieces in tow," adding, "Ralston claims he's ex NYPD!! That can't be!!! Ex NYPD don't become crackhead, ex jailhouse paparazzi!" It's unclear why Baldwin referred to Miller as "Ralston," though he has already filed a complaint with police alleging that the photographer "pushed into him", during the incident.

State Senator Malcolm Smith has called on Hollywood to blacklist the actor, "If these allegations are true, then no television network or film studio should hire the veteran actor until he seeks help," Smith said. "In today's modern age, it's a disgrace that people still use remarks that provide hatred to others based on race, religion or origin."

Baldwin's wife Hilaria has already jumped to the actor's defense, "Shame on anyone who says my husband is racist," she tweeted. "If you could only see/hear the dangerous things paparazzi will do & the lies to get a 'story.' "