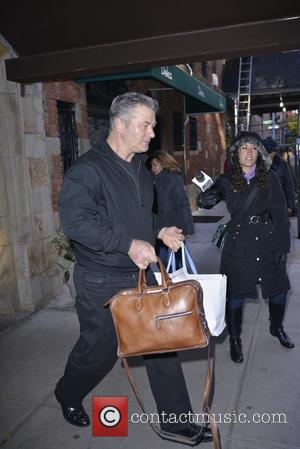 Alec Baldwin's accused stalker has been ordered to spend 30 days behind bars for contempt of court after continually interrupting proceedings in her ongoing trial.

French Canadian actress Genevieve Sabourin is currently facing charges of bombarding the 55-year-old actor with emails and voicemails, and making unwelcome visits to his Big Apple homes after enjoying a meal with him in 2010.

Baldwin denied ever engaging in a romantic relationship with Sabourin during testimony in Manhattan Criminal Court on Tuesday (12Nov13), and called her alleged pestering "nightmarish" as he broke down on the stand.

His claims prompted a number of outbursts from the 41-year-old suspect, who loudly accused the actor of "lying" on multiple occasions. Judge Robert Mandelbaum ordered her to stay quiet and threatened to hold her in contempt of court for her actions, before she was bundled out of the courtroom by her lawyer, Todd Spodek.

When she returned to court on Wednesday (13Nov13), she was marched off to jail after disobeying Judge Mandelbaum's warnings by interrupting her own attorney.

In another trial twist, movie producer Martin Bregman has also accused Baldwin of lying under oath after the actor told the court he only met Sabourin for dinner as a favour to the veteran filmmaker, who had reportedly been having an affair with the woman.

The former 30 Rock star, who grew emotional during the hearing, claimed 41-year-old Sabourin was the married Scarface producer's longtime mistress - an allegation that stunned Bregman and prompted him to speak out to the New York Daily News.

He says, "He's lying... To sidestep any involvement with (Sabourin), he made up a report."

Branding the move "pretty stupid", he added, "I'm 87 years old and that (reports of an affair with younger woman Sabourin) is very flattering, but that's all it is."

Tuesday's court proceedings also featured testimony from Baldwin's wife Hilaria, who told the court she once tried to reason with Sabourin over the phone in a bid to persuade her to leave the couple alone.