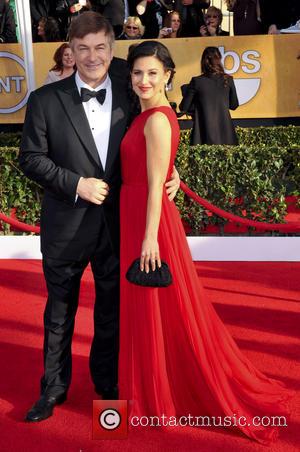 Alec Baldwin's pregnant wife Hilaria Thomas Baldwin is being sued by a man who claims one of her popular New York yoga classes left him with physical and emotional injuries. The man from lower Manhattan says he was injured while taking a class from Baldwin's wife on January 15.

In papers obtained by the New York Daily News, Mr Spencer Wolff says he suffered "serious" and "severe" injuries and "emotional upset," during the class at Yoga Vida. The suit doesn't specify how Wolff was injured, though it blames the "overcrowded" class and Thomas' "negligence" as the two causes of the alleged accident. Thomas married the 30 Rock actor in June and recently announced she is pregnant with the couple's first child. Hilaria has been teaching yoga regularly since 2005 and is thought to be a trusted and experienced instructor. A representative for Yoga Vida did not immediately return requests for comments, though Alec has taken matters into his own hands.

According to TMZ.com, the actor threatened to choke a reporter to death and hurled a racial slur at a photographer after being approached while walking his dogs in New York. New York Post reporter Tara Palmeri asked the actor about the lawsuit against Hilaria, to which he allegedly grabbed her arm and responded, "I want to choke you to death." Both Baldwin and photographer G.N Miler filled harassment claims. Alec and Hilaria Baldwin at the Screen Actors Guild Awards