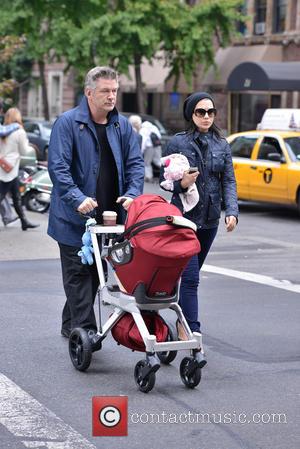 Actor Alec Baldwin grew emotional in court on Tuesday (12Nov13) after coming face-to-face with his accused stalker as he testified about the "nightmarish" harassment he has suffered since 2010.

French Canadian actress Genevieve Sabourin stands accused of bombarding the 55 year old with emails and voicemails, and making unwelcome visits to his New York homes after they enjoyed dinner together in 2010.

The former 30 Rock star maintained in Manhattan Criminal Court that the meal was purely business, claiming he gave her career advice as a favour to his friend, Scarface producer Martin Bregman, who had been romantically involved with Sabourin.

However, he began fearing for his family's safety when Sabourin showed up on his doorstep on multiple occasions, and even turned up in the Hamptons on the day he proposed to his now-wife, Hilaria, in April, 2012.

Fighting back tears, he recalled, "I ran to tell my wife not to go near the door because I wasn't sure if she had a gun or a weapon or where we were at this point, and then I called the East Hampton police."

Baldwin insisted he never had a sexual or romantic relationship with Sabourin and described the alleged harassment as "nightmarish".

His denials prompted a number of outbursts from Sabourin, who repeatedly interrupted Baldwin's testimony and even shouted out, "You're lying", as the judge threatened to hold her in contempt of court. She was subsequently bundled out of the courtroom by her lawyer, Todd Spodek.

In hearings last week (ends08Nov13), prosecutors shared a number of emails Sabourin had reportedly sent to Baldwin, including one in which she expressed her desire to conceive a "mini Baldwin" on St. Patrick's Day in 2012.

Spodek claims his client only contacted Baldwin seeking closure for their "crumbling" romance.

New mum Hilaria Baldwin is also expected to testify in the case.