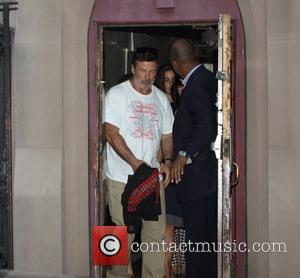 Picture: Alec Baldwin and fiancee Hilaria Thomas exits a church after attending a counseling session with the Pastor on the eve of their wedding. New York...

Actor Alec Baldwin is a married man again after exchanging vows with fiancee Hilaria Thomas.
The 30 Rock star, 54, wed 28-year-old yoga instructor Thomas at the historic St. Patrick's Old Cathedral in New York on Saturday (30Jun12), reports People.com.
The Catholic ceremony, performed by Reverend George Deas, also included readings in Spanish in recognition of the bride's upbringing in Spain.
Close pal Matthew Hiltzik tells People magazine, "Hilaria Thomas and Alec Baldwin were married this evening at St. Patrick's Old Cathedral in New York City with family and friends sharing in the joy of the occasion."
Guests included Baldwin's actor brothers Stephen and Billy, his daughter Ireland, his 30 Rock co-star Tina Fey, director Woody Allen and actress Mariska Hargitay.
The wedding celebrations continued at a reception at New York University's Kimmel Center.
Details of the couple's nuptials were kept a secret right up until the big day, with the groom's brother Stephen Baldwin telling the New York Post earlier this week (ends29Jun12), "I'm going. I haven't been told the location yet. That's about all I can say, because he (Alec) can still kick my butt."
It is Baldwin's second union - in 1993, he married Kim Basinger, the mother of teenager Ireland, but they divorced in 2002.
The wedding caps off an eventful week for Baldwin - the quick-tempered actor hit headlines on Friday morning (29Jun12) after clashing with a paparazzo outside his Manhattan home.