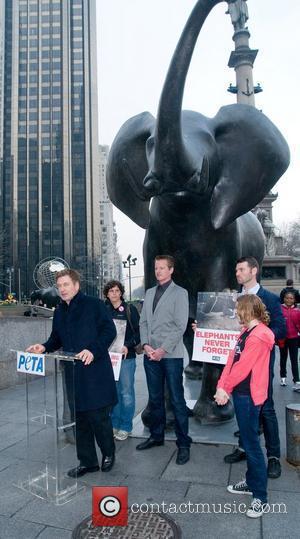 Alec Baldwin has taken to Twitter to vent his anger once again - this time directing the vitriol towards his stalker Genevieve Sabourin, who was arrested on Monday (April 9, 2012) for aggravated harassment and stalking, reports the New York Daily News.
The 30 Rock star took to Twitter on Tuesday to hit back at the French Canadian aspiring actress, who sent the actor a flurry of romantic emails before turning up at his Manhattan apartment. The 40-year-old claims she had a two-year relationship with Baldwin and plans to marry the actor, despite the fact he recently announced his engagement to yoga instructor Hilaria Thomas. One of her emails read, "I need you now, please Alec come and pick me up now. I am less than 10 min away from you tonight". Baldwin categorically denies any relationship and tweeted on Tuesday, "Isn't it odd when an accused stalker is in handcuffs, being taken away by the cops, yet smiles for the cameras?". In another post, he added, "I am lucky and grateful in my life now, no matter what the motivations of certain others". Though Baldwin admits to meeting the woman for dinner several years ago, he denies the relationship was anything other than professional. He and Sabourin are understood to have met on the set of the Eddie Murphy movie 'The Adventures of Pluto Nash', hence Baldwin re-tweeting a message from a fan that read, "This is irrefutable proof that nothing good can ever come from the movie Pluto Nash!".