Alec Baldwin's Teenage Daughter Ireland Has Shut Down Speculation She Is Dating Olivia Wilde's Ex-husband By Sharing A Series Of Her Dad's Nosy Text Messages Inquiring About Her Rumoured Love Life. 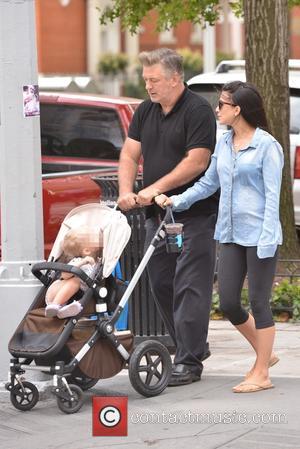 Model Ireland Baldwin, whose mother is Kim Basinger, was snapped on a coffee date with rocker and Italian royal Tao Ruspoli, 39, in Venice, California on Wednesday (07Oct15).

The meet-up sparked rumours of a new relationship online, and Alec was quick to alert the teen to the latest gossip by sending her a link to one article early on Thursday (08Oct15). Ireland subsequently posted a screenshot of the funny text exchange on Instagram in a bid to put a stop to the unfounded claims, which suggested she was "getting cozy" with Tao.

Denying the reports, she responds to her father, "Oh my god I just met him yesterday". Unsatisfied with her answer, Alec probed, "Well...? Are you getting married?", to which she replied, "No, dad Jesus".

The cheeky 30 Rock star continued to tease his daughter, writing, 'Am I going to be a grandfather?', prompting her to sarcastically retort, "Very immaculate coffee conception".

Ireland captioned the screenshot, "This is what happens you get coffee with friends. You get coffee and then you pregnant (sic) and then it spirals out of control from there..."

Ireland was previously linked to a man called Jon Kasik, while Tao and Olivia were married from 2003 to 2011.