Alek Wek felt comfortable walking in Rihanna’s Savage X Fenty show in 2019, because there was “so much positivity” around the show. 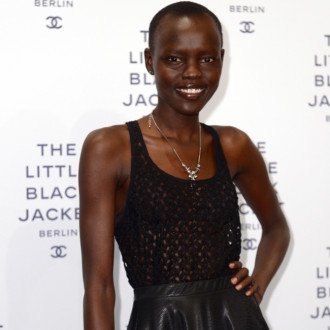 Alek Wek felt comfortable walking in Rihanna’s Savage X Fenty show in 2019, because there was “so much positivity” around the show.

The 43-year-old model took to the runway at the first Savage X Fenty fashion show in September last year, and has said that whilst she’s usually too “shy” to model lingerie, she felt at ease during the show because of the “amazing energy” of those around her.

She recalled: “I am not the kind of woman to put on lingerie and walk out there. To be honest, I’m quite shy. But this was different. Well, first of all, I was wearing one of my favourite colours - aqua blue. A blue lace veil down to the floor that followed me as I walked.

“There was also such amazing energy and so much positivity around the show. Everybody who was a part of it felt good.”

Alek also praised milliner Stephen Jones - who created the headpieces for the show - for helping her and the other models feel comfortable, because he would always make sure they felt “appreciated”.

She added: “Stephen Jones was on set and did all the headpieces. He would go up to every single girl as he was fixing the veils and tell them how beautiful they looked. You could just see their eyes light up. The simple little things that come when you recognise and appreciate people are really quite amazing.”

And the beauty had kind words for Rihanna too, as she said the singer “embraced” the different backgrounds of all the models hired for the show.

Speaking to Vogue magazine about some of her career highlights, Alek explained: “It was so good to see everybody turn it out. There were people of all different ages and different backgrounds. Rihanna was dancing with all the dancers. She accepted everybody for who they were; she really embraced us.”