Alesha Dixon has finally announced the arrival of her and her partner Azuka Ononye's baby daughter. 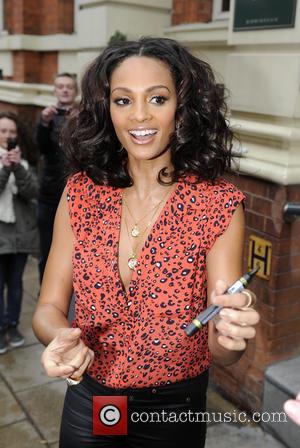 Alesha Dixon has revealed on her 35th birthday that she has now given birth to her first child; a daughter which she has colourfully named Azura Sienna.

The 'Britain's Got Talent' judge posted a message to her followers on Twitter today (October 7th 2013) reading, "Thank you for all of your lovely birthday messages! I've had the best present in the world........." Fans did not have to wait long for the meaning of this mysterious message as she then revealed, "My baby girl Azura Sienna was born last week!!! I'm elated and over the moon" - a statement that she completed with a smiley face and a series of kisses. "It seems quick because I was hiding it for so long!!! I was in my 6 month of pregnancy at the Britain's Got Talent final!" She added.

Azura is the first child of Alesha and her former backing dancer boyfriend Azuka Ononye and though it may not seem like it was a very long pregnancy, the singer had in fact been hiding it until June this year.

A spokesperson for her had told the Daily Mail, "Alesha Dixon and her partner Azuka Ononye are delighted to announce they are expecting their first child later this year. Alesha and Azuka are looking forward to this happy chapter in their life and would request privacy to enjoy this happy and most important event."

Alesha and Azura have been together for three years now and are yet to be married. However, we hope this beautiful new commitment they have in their lives will prompt a few wedding bells in the near future for this adorable couple. Alesha says she's 'over the moon' at the new arrival She has named her baby daughter Azura Sienna