Twenty year old Newcastle based singer/songwriter Alex Butler blasts his way onto the music scene with big-sounding ode to the 1960's pop art culture Turn EP, a clear salute to the retro-chic, pinstripe-suited image of yesteryear. 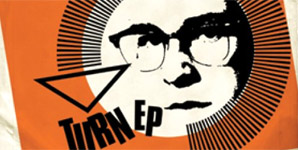 Alex Butler styles himself as pop-ska-indie, but in actual fact the sound on this EP immediately should strike a chord of familiarity within any of the more 'indie' listeners of today, as his heavily accented, semi-spoken-but-mostly-sung, colloquial vocals bear a startling resemblance to the Arctic Monkeys vocal style. Whilst this works very well with the style of music Butler was clearly going for, it clearly won't be to everyone's taste. In fact some people might actually find it almost infuriating, enough to put them off listening. This would be a shame because the Turn EP is a small glimpse into what has a huge amount of potential. Alex Butler is a talented musician, with a clear, conscious idea of what he wants his music to sound like. He's clearly got the vision and the sound in his head, and the talent to be able to articulate and realise it all the way through to its musical fruition.

The EP itself is really very catchy. The repetitive chorus on the title track Turn might slightly grate on one who would find his vocal styles irritating, reinforcing their desire to stop listening immediately, but beyond that the music is upbeat, energetic and wholly enjoyable to listen to. Musically, it's excellently recorded and mixed; the clear use of the aged 1960's Stratocaster guitar, perfect for the music both in image and sound really gives the music a feel of that retro authenticity, even if it could be interpreted as a bit of pretence because, after all, it's not authentic. But why should that stop him? It's classic pop music that's enjoyable to listen to and sounds like it was enjoyable to make.

The only downfall one could find with this release is the slight sense that it tries a bit too hard to be a throwback to the old-school, and also the vocal style that might grate on some less patient listeners. The whole image of the album and the artist is extremely clear, there can be no mistakes about the style of music that Alex Butler wants to create, which might actually come back to limit him in the future. For now, though, if his style proves popular (and because it has such strong links with some indie artists of today, it should do) then one could expect to hear a lot from the young Alex Butler.