Alexa Chung would love 'X Factor' host Dermot O'Leary to take over her Style Icon crown at the British Fashion Awards 2013 in December. 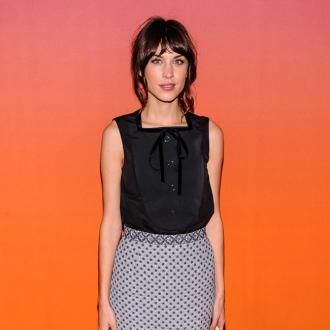 The presenter-and-model scored a hat-trick by winning the prestigious prize for the last three years in a row, and now hopes the fashionable 'X Factor' host can carry on her legacy after she missed out on the nominations this year.

Asked who her top pick would be, Alexa told BANG Showbiz: ''Harry Styles is up for it... Dermot O'Leary's on the list, I'd love to see him win. Let's give it to him. He's always got a lovely suit.''

Dermot will battle it out for the coveted title with the likes of Kate Moss, Cara Delevingne and Tinie Tempah at the London-based ceremony next month.

Alexa insists she isn't bitter about not being shortlisted and is secretly pleased she won't have to make another ''awkward'' acceptance speech.

She mused: ''I think it's fine. I won it three times in a row... At least I don't have to do a speech, which I've been very awkward about giving the last three years!

''Also I think it's quite a good indication of fashion and how it moves, how you're in and you're out. Maybe in 10 years time people will start [thinking of] me again!''

Alexa - who first moved to New York in 2009 - also admitted she still identifies with quirky London style and feels out of place next to the US city's ''slick'' residents.

Speaking at the Alexa Chung for Eyeko launch at Selfridges in London earlier today (13.11.13), Alexa explained: ''I definitely identify with British style much more. I find it so inspiring when I land back in the UK and I drive through east London, everyone just looks so interesting and are more willing to experiment here and be a bit more eclectic here.

''In New York, the thing about those women is that they're so well polished and put together, everyone gets a manicure every week. It makes everyone look really slick.''

Alexa has teamed up with independent brand Eyeko, working closely with founders Max and Nina Leykind to create her own range of eye make-up products. The limited-edition range is available in 1000 Eyeko stores, as well as Selfridges, Space NK and Sephora.

Fans can head to Selfridges tonight from 7pm to 8pm to meet Alexa at the global launch of Alexa for Eyeko or head to eyeko.com to purchase an Alexa Set.