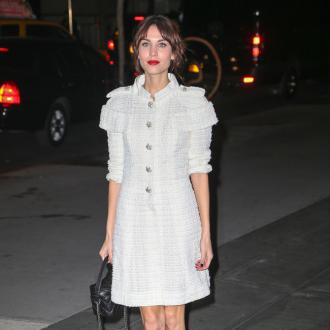 While the style icon tried to go on a fitness kick before her landmark birthday on November 5, she insists she won't be cutting back on cigarettes and has decided to stock up on vitamin pills rich in omega 3 in a bid to feel healthier instead.

Quizzed if hitting 30 had changed her outlook on beauty, Alexa laughed and told BANG Showbiz: ''No ... I'm still smoking like a chimney. It's not going to happen overnight because I've only been 30 for, like, a week.

''But approaching 30, I started thinking about being healthier. I've started doing ballet and being conscious of what I put in my body. Oh, and I eat fish oils now as well!''

The model-and-presenter enjoyed a wild birthday bash with pals including One Direction star Harry Styles, Kelly Osbourne and Florence Welch in London last week, and Alexa revealed her cheeky party guests scoffed all her cake while she was sleeping.

Reminiscing about the party, she joked: ''It was epic. Endless. Good cake. The thing about that cake was we didn't cut it, which was weird. People in the morning just scooped fistfuls of it into their mouths.

''When I walked past the cake in the morning it was literally as if a gang of children had come and attacked it. So that was nice.''

Alexa has teamed up with independent brand Eyeko, working closely with founders Max and Nina Leykind to create her own range of eye make-up products. Fans can head to Selfridges on Oxford Street, London, tonight (11.13.13) from 7pm to 8pm to meet Alexa at the global launch of Alexa for Eyeko.